How to Do "Las noticias" daily using the Question Words 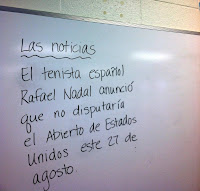 Okay, I'm finally doing "Las noticias" every day at the beginning of the block (in levels 3, 4, and AP) in a way that seems to be working consistently and meeting my objectives of speaking more Spanish in class, talking about current events, teaching real-life vocab that might not otherwise come up on textbook vocab lists, and using authentic resources.  I've been looking up articles on BBCmundo.com (especially under the "America Latina" tab) and taking headlines or opening lines from them to write on the board before the class comes in.  I spend about 5-7 minutes on this first thing when I get to school, and that prep time has been well worth it.

When class starts, I start pointing at the "News" and saying, "Clase, mira las noticias.  ¡Mira!" until everyone is looking at it.  I may or may not confirm their understanding of key words, unknown words, and/or the entire news bit, depending on how I feel like working with it that day, but either way, I ask whole-class questions about it in Spanish.  I have my Question Words posters on the wall directly above this whiteboard, and I go down the list of Question Words asking questions about the "noticias."

I'm spending about 5-7 minutes at the beginning of class on this whole Noticias/question and answer session, maybe 10 when we get off on a tangent (like talking about Hidalgo, etc. from the Noticias this past week: "El presidente de México dio el "Grito" de independencia el domingo, el 16 de septiembre, desde el balcón del Palacio Nacional.") I'm finding it reasonably easy to hold their attention on the Spanish sentence as well as my Q&A, possibly because I act so interested myself in the "news" and then act really impressed when they understand it as well as respond.  I'm re-teaching saying numbers, dates, and of course the Question Words as I go, but all of that is needed (to a highly fluent/natural level) for the AP Spanish Language and Culture exam.  The "noticias" are also good for highlighting names and details of important Hispanic figures, some cultural info, current events in Spanish-speaking countries, etc. without spending much time on it or doing time-consuming, class-time-wasting projects.

I'm leaving the same "noticias" sentence there for 2 days (all A and B blocks) and using it in all 3 levels (3, 4, and AP,) although I might add something to it for AP at times.  So really, I only have to look up a new news bit every other day, and like I said, it's meeting a lot of my goals for things I wanted to include this year.

If you have my 3A book you'll notice I mention talking about "Las noticias" approximately every other lesson, but I'm actually doing it every single lesson now since I figured out exactly how I wanted to do it (using the list of Question Words, by rote.)

Email ThisBlogThis!Share to TwitterShare to FacebookShare to Pinterest
Labels: Lesson Planning, Levels 3 and 4

Okay, new method for getting actors this fall that is going really well for me:

1. Write a list of characters needed on the board (Chico 1, Chico 2, Chica 1, etc.)
2. First day - ask a confident, bossy student to choose all actors.  Write their names in the list on the board as he/she picks them.  This works best if the choosing student is popular; other kids want to be picked by that person.  (Fair or unfair, just telling you how it is.)
3. After first day - whoever played the main character (Chico 1) in the last skit chooses all actors for the new skit.
4. Variation - whoever played the main character (Chico 1) chooses the main character for the new skit, then that (new) person chooses Chico 2.  Chico 2 chooses Chica 1, and so on.

Getting actors for skits has suddenly gone from big Argument/Whine Time to pretty fun, actually.  Mine really like getting to choose actors, and everyone else in the class seems to enjoy waiting to see who they are going to pick.

Going back to my previous post about getting actors and how students will get up to act as long as they are being "forced" to do it (NOT volunteering on their own)--being chosen by other students is probably the best "forcing" method I've found because they like the attention from each other.  So far this year, I've only had one student beg not to act after being chosen by classmates, complaining he had already acted a lot (which was true) and that he didn't feel good that day.  So, I let him choose someone to take his place, and that person acted willingly.

Another fun thing to do with the board list is add a few story details to it, like "Coche, Animal," etc. and ask for those up front as well.  I owe that idea to my friend Jennifer Noonan who taught with me a couple of years ago here in Colorado, now moved on to Chicago.  (Hi Jenn!)
at September 17, 2012 No comments:

My door faces my colleague Alexis' door, and she usually teaches with her door open, which offers me a clear view of her acting area and her students' engaged postures as they sit in their desks, leaning forward, fascinated with the lesson.  At the moment, they are in the midst of the Roger el Romántico stories (that teach greetings, introductions, and goodbyes) and it has been such a joy and delight for me to spy from a distance.  Or sometimes up close, because every so often a smiling Roger, complete with purple velvet hat, invades my room to give me silk flowers.

This is her second year to teach through the 1A stories and she's really pulling them off well.  I always found that my second year through the same set of stories goes better as I have more confidence, get more ideas about what props to use, etc.  That is true for me right now with the 3A stories for sure.

Alexis came over yesterday after school to show me a music video one of her classes made to the song "Call Me Maybe" starring Roger and La Sra. Doubtfire.  I wish I could post the video, but unless the kids themselves do it, I can't put their faces on the internet.  I am still smiling this morning just thinking about it.  This is the first time I've taught right next to someone who is using my stuff, and I just can't tell you guys how gratifying and fun it is to see my stories that I wrote coming to life and bringing such fun to someone else's classroom.

And of course, I love getting flowers from Roger el Romántico.  Who doesn't????
at September 01, 2012 No comments: