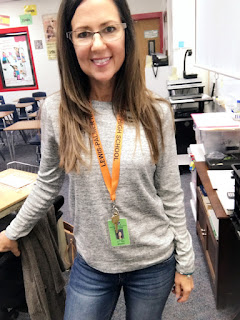 I started teaching Spanish in the Fall of 1999 at Norman North High School in Norman, Oklahoma on an alternative teaching license. With no student teaching experience under my belt, it was sink or swim that first year. Thankfully, I swam, by teaching Spanish the way I was taught it in high school, by turning the textbook pages and dragging kids through the exercises thinking (hoping) they were learning something. By the end of my first year, even though I had rave reviews from my evaluators, I wasn't thrilled with my students' Spanish output, because it amounted to hardly anything.

Desperate for new ideas, I signed up for a Blaine Ray workshop in Oklahoma City in the summer of 2000. Susie Gross was traveling and teaching with him that year, and the 3-day presentation they gave totally changed my perspective on how to provide comprehensible input in class to teach vocab. I went back for my second year of teaching and started adapting my school's textbook (Dime Uno,) writing skits to go with the vocab and grammar. Eventually, by trial and error, I weeded out the skits that didn't work or weren't funny in class, and in 2005 after moving to Colorado, I wrote my first set of Spanish 1 lesson plans books while I was teaching middle school Spanish at Creekside Middle School in Monument, just north of Colorado Springs.

What originally gave me the idea to write a book with my skits was getting asked by other teachers (whenever I would present sessions at conferences) "where I got all my skits." My answer was, "Oh, I write them myself," to which they would often reply, "Well, if you ever write them all down in a book or something I'll buy them." So the idea started germinating, but I didn't have an organized book framework until I started working on my Master's degree at Colorado College. In a Curriculum and Instruction course that I took, we were required to choose a final project from a list of options, and I chose "Plan the first 4 weeks of your instruction for the year using a model lesson plan template." I took one of the model lesson plan templates that we had been working with in class, adapted and modified it to fit my preferences, and used it to complete 4 weeks of lessons incorporating some of my skits. I made an "A" on the project, and the first few lessons in my older Spanish 1A 2005 book were born.

In 2009 I decided to go back to teaching high school (more my comfort zone than grades 6-8) and was hired to teach Spanish 1 and 2 at Lewis-Palmer High School. Two years later I moved up to Spanish 3 and AP Spanish Language and Culture, and the year after that we added a separate Spanish 4 class to my schedule. On the side (meaning, using ALL of my free time including summers for the past five years!) I wrote my high school lesson plan book series, including a brand new level 1 that is aligned with Exprésate as well as Spanish 2, 3, and 4. I mainly write my lesson plan books because I need them to teach my own classes. Selling them online is just a bonus!

As for my official credentials, I was Nationally Board Certified in World Languages Other Than English in 2003, and I currently hold a Master Teacher License in the State of Colorado. I completed my Master of Arts in Teaching in 2007 at Colorado College, and I was hired by ETS as an AP Reader for the AP Spanish Language and Culture exam in the summer of 2015. I scored for ETS for two years in a row, and used that knowledge to write my AP units that I now sell on Teachers Pay Teachers.

I'm a health nut who's into vegetables, Zumba, travel, decorating, writing, and gardening.