How to Do Your Speaking Tests in 15 Minutes

If you're like me, it's that time of year (final exams) that you have to figure out some way of testing your students' speaking in Spanish that makes sense and doesn't take up several days of class time. For a few years, I put on a movie and sat in a corner in the back of the room, calling individual students to come sit nervously with me asking a series of questions (which usually involved me speaking way more Spanish than they did...example:  Me:  ¿Cuáles actividades te gusta hacer en tu tiempo libre?  Them: Basquetbol.) Then, I got the idea of giving them a choice of three or so storyboards (drawings from skits we had acted out in class) and having them retell me the story from the pictures while I sat listening, counting their complete sentences, maybe making a note of correctly conjugated verbs, and grading it with a rubric.  Now they were doing ALL the talking in Spanish, and it felt great to hear how much they had learned, kid after kid.

The only problem with that idea was how long it took, because they talked so long. I found myself even cutting some of them off after five or six minutes of speaking just so I could get a few more students done before the bell. So it would take about two and half to three 90-minute blocks to get through a class of 32-ish, which is a lot more class time than I feel I have to spare at the end of the semester with finals, final reviews, and everything else that's going on.

Now I have a new system that works so much better for me. Here are the steps:

1. Set up a Google Voice account. It's easy and free.
2. Take the phone number you receive for Google Voice and make an instruction sheet with it that says:

1. Call Sra. Waltman’s Google Voice:
719-XXX-XXXX
2. Leave a message:
a. “Me llamo _______________” (full name)
b. Title of cuento: ____________________
c.  Tell story in Spanish, using at least one full sentence per picture.  More details = higher score
d. “¡Adiós!” + hang up
3. Either make copies of the instruction sheet (you can do this on the back of the storyboard copies) or project it from your laptop onto a screen.
4. Make copies of the storyboards. I do three storyboards, enough copies of each for the entire class, on three different colors of paper so it's easy to sort them into separate piles.
5. Day of the speaking test, as they are freaking out about having to take a speaking test, tell them it's going to be no big deal. They are simply going to tell the story to their partner like they always do in class, but this time record themselves on their phones.
6. Pass out a copy of all three storyboards to all students and give them some time to think about which one they want to tell.
7. Do one "Practice Run" where they tell their chosen story to their partner for one minute while you circulate to supply words they couldn't remember from that story. I don't let them write anything down, but I will tell them how to say things like "marked out" and "cooked him on the grill" (two examples from yesterday's speaking tests.) Switch partners and let the other partner practice.
8. Say, "Okay, partner one, get your phone or borrow someone else's. Ready? Dial!" So they call the Google Voice number and start talking. (I tell them that if my Voicemail cuts them off, that is okay, that just means they talked for three minutes already so that is enough talking.)
9. Tell your Partner 2s to go ahead and dial when their partner is finished. I like to keep the room kind of noisy with talking so that no one gets left out trying to record their speaking test with everyone else listening to them.

And...I'm done! Except for the grading, which I do during plans, breaks, a few after school, etc. over finals week. I don't always listen to every word of every recording. You'll get a really good idea of how well they are speaking within the first 30 seconds - 1 minute. However, a lot of times I do let the whole thing play while I do my filing, end-of semester cleaning out and organizing, etc. in my classroom. I record the scores alphabetically on a rubric and when a class is all filled out, I'm ready to enter it into my gradebook, done. And incidentally, if a kid doesn't say their name and I can't figure out who it is, I text the number to ask. I usually have to do that about once or twice per semester, and the student usually thinks it's pretty funny, we wish each other a good break, and that's that.

If you have a good method for doing your speaking tests or other ideas to add, please share in the comments!

Email ThisBlogThis!Share to TwitterShare to FacebookShare to Pinterest
Labels: Levels 1 and 2, Levels 3 and 4, Speaking 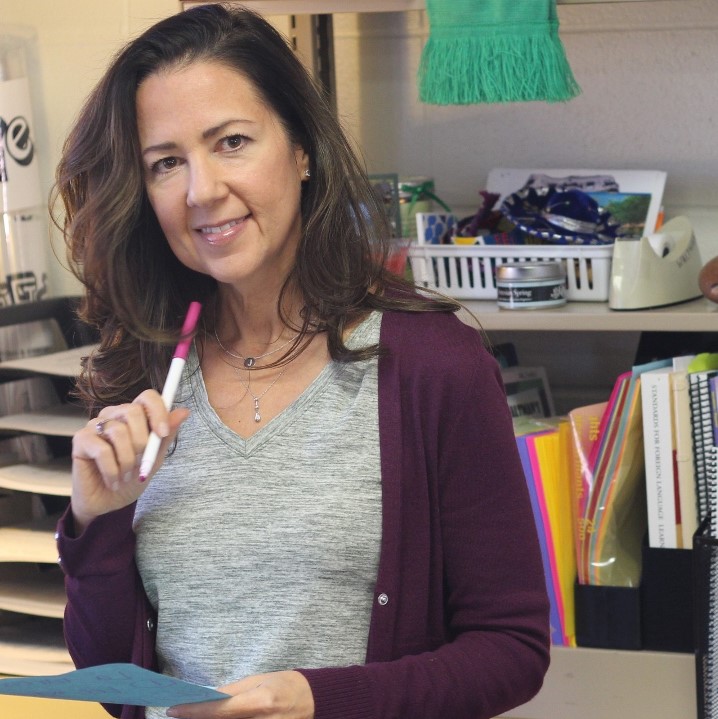